Name
About Me
Finally a new presentation.. woo.

Things I Wish I Knew Before Going to College

As a recent graduate, I find myself already reminiscing about my time spent in college. I often think
about things I wish I would have known and things that I would have done differently. I know that Aniyah will be going off to college soon and that some of you are either in or looking forward to it! With that said, here are a few things I learned and discovered in college. 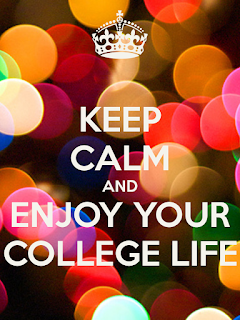 To everyone reading this, when it is time to go to college or university you can't forget what your main goal is; you are there to get an education. Don't be afraid to take a risk and try new things. Don't forget to take a breather and have fun to keep you mentally sane. I will leave you with this piece of advice that I've been told before: You will make time for you want to. This can go with having fun, dating, and even being involved in your campus.

Let me know what you think in the comments and if there is anything you would like to see!

So, finally I'll showing for you guys my absolutely favorite mythological creature from Brazilian Folklore, Iara! 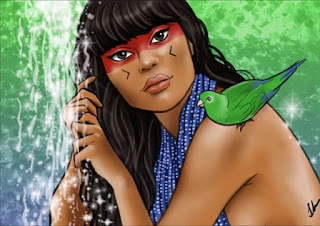 A little bit about Iara/Yara): also known as 'Mother of Water' (Mãe d'água in Portuguese), Iara is an indigenous legend (originally came from indigenous tribes of Northern Brazil, in the Amazon Forest region) of a wonderful mermaid with beautiful long black hair and brown eyes, and she can sing melodies that hypnotizes and attract men because of her beautiful voice!
But why did she became a mermaid? According to the legend, before that she was an regular indian and she always had an enviable beauty, and her siblings were envious of her beauty and also because of her warrior skills, and because of that they tried to kill her. But at the time of the clash, due to her warrior skills, Iara reverted the situation and killed her siblings.
But after that she got afraid of the possible punishment of her father (who is the Pajé or the leader of the tribe) and she ran away, but her father found her some time after that. And her punishment for the killings was to be thrown on the river to die.
After that, the fishes of the river wanted to save the beautiful young woman and transformed her on a mermaid. Since then, she lives on the Amazon rivers attracting men with her beautiful voice and after that she bring them to the bottom of the river, killing them drowned!
Well, you (if you are a man) can escape from her hypnotizing voice, but it's very hard to escape and when you escape you can get crazy! The only way of coming back to your normal state is searching an Pajé to cure you.
Fun fact: the name Iara/Yara came from the indigenous term "Iuara", which means "the one who lives in the waters".

By the way, here is the make-up: 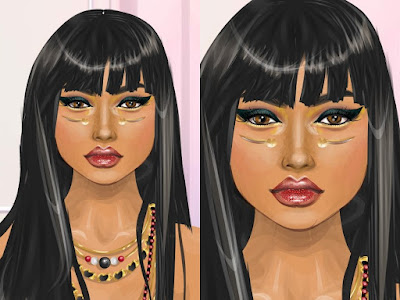 For this makeup, I used the doll DanyHada.

So, for this look I tried to do some different things... At the lips, I chose a natural lip color and added some red decoration on it. For the eyes, I chose a dark green and black eyeliner and paired with some yellow eyeshadow at the corners. I also added a beautiful golden decoration right under the eyes to add a special touch to the look and to create a connection with the yellow eyeshadow. For the hair, I decided to go with a long, straight black hair with bangs like the Iara from the image above, and putted some black eyebrows to match the hair color. And I added some colorful necklaces to resemble the necklaces that some Brazilian indigenous people use it, with some golden, red, black and white.

Giveaway results: So, as everyone who have read my first Folklore Series post, I made a giveaway that ended on July 30th at 7pm BRT. We had 15 entries so it was a total success! Unfortunately at the day I totally forgot of the deadline to make the raffle at sorteador.com.br but I made it at 8am BRT at July 31th! And here are the results, as you can see, the raffle number generator website chose a number between 1 to 15: 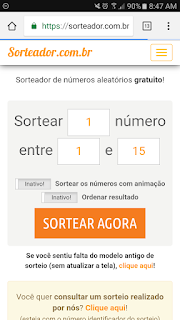 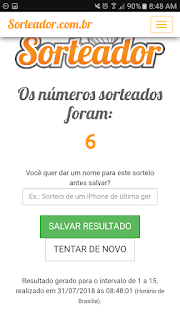 *Suspense* So the winner of KeldalIJenner lip design is: 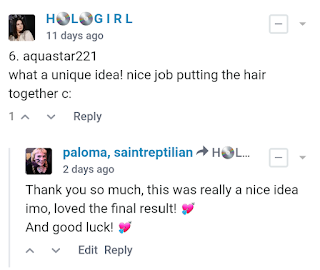 Congratulations to H💿L💿GIRL (a.k.a aquastar221) for winning! You can claim your prize at the comments section of this post! After claiming, I'll reserve it to your doll!

Also thank you very much for all other girls who entered the contest, without you guys this could not happened! You guys are amazing!

Hi Y'all, Our world today is one that is very focused on social media and the technology that makes it accessible to us. It is so eas... 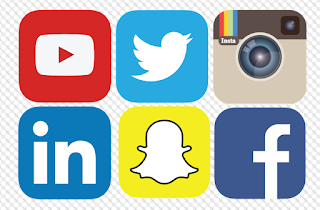